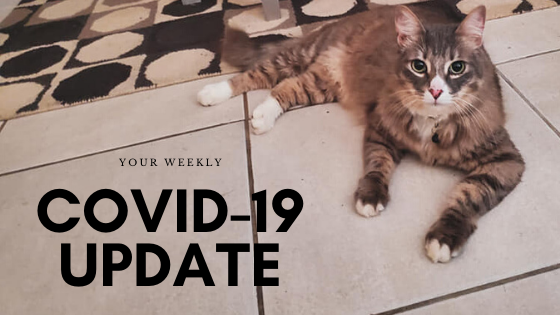 My wife, Rhoda, and I adopted a cat from SOCKS on Valentine’s Day this year. His name was Ben but we decided to change it to Dunkin. Yes, like the donuts. We even got him this cool name tag. 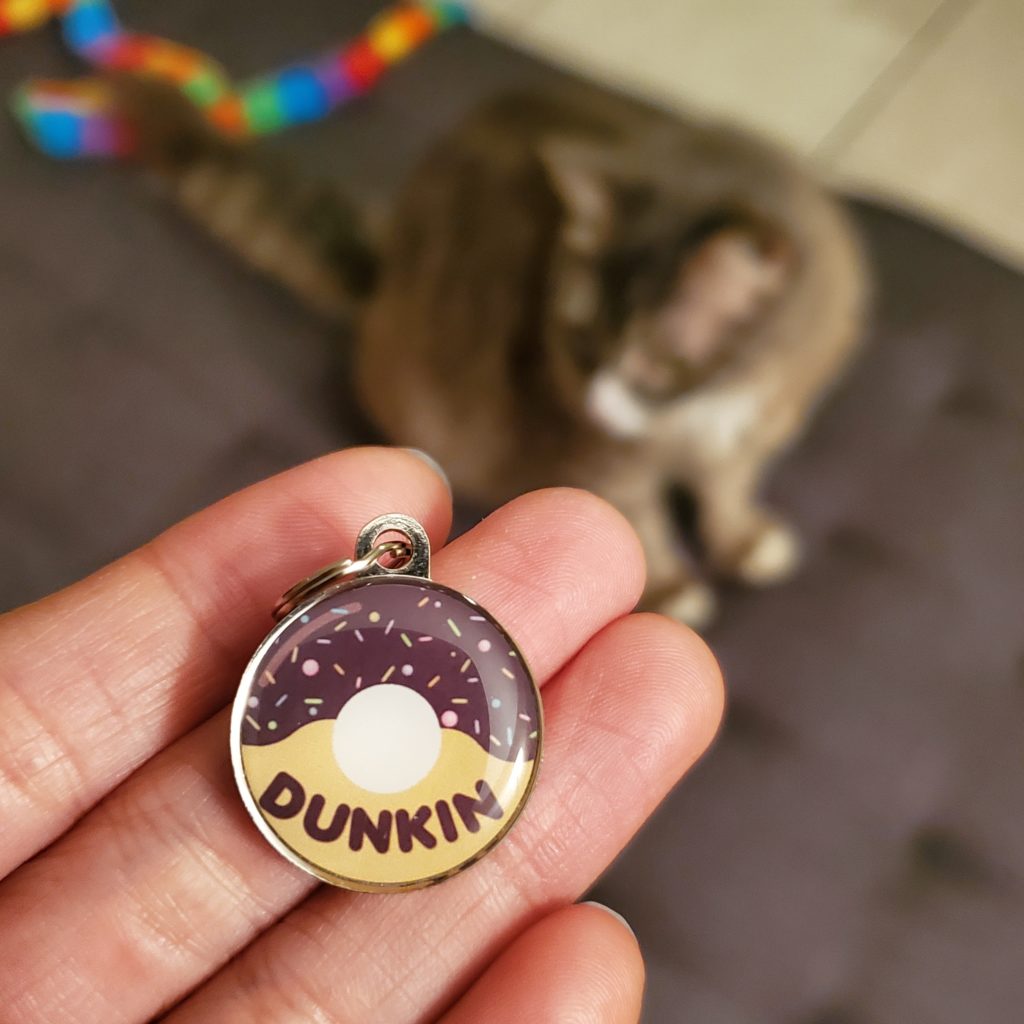 Now, we live in an apartment complex that doesn’t allow dogs, only cats. As Rhoda talked to friends, she started to warm up to the idea of adopting a cat. She even volunteered at Alaqua to see if she got a good vibe with any of them. Because of that experience as well as conversations with friends who have cats as pets, she warmed up to the idea of having a cat as a pet.

But What About You!?

I’m not a huge animal person. That’s not to say that I hate animals. I’m cool whether or not I have a pet. I’ll interact with others’ dogs when I visit them. One of the reasons I was hesitant to get a dog was because of the odd hours I work as a DJ. Sometimes I don’t come in until 2 to 4 in the morning. Since Rhoda is a light sleeper, a dog barking would definitely wake her up. 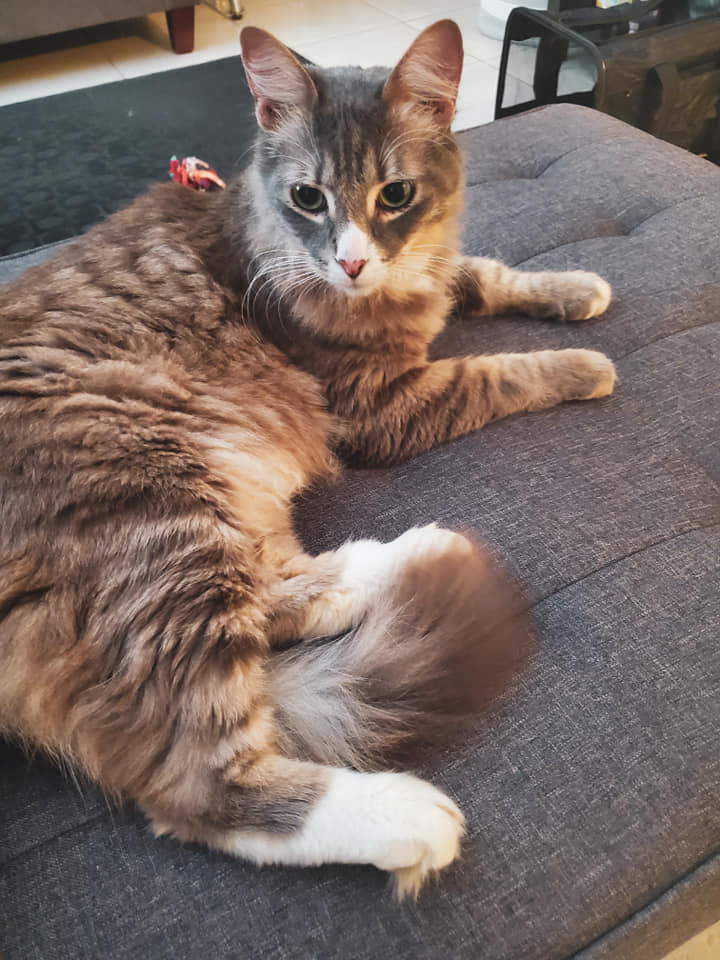 Rhoda met Dunkin at SOCKS while visiting the shelter. At animal shelters, they often have people like Rhoda help acclimate the animals to human contact. When she first described him, she said, “He’s SO pretty!” Unfortunately, Dunkin has a preexisting condition. His diabetes, controlled by diet, is in remission. We think that he experienced a period where he didn’t have much food, so he would overindulge when given the opportunity. He is EXTREMELY food motivated.

It was to the point where he would start meowing at 6 in the morning when we typically get up around 8 on a normal weekday (sure, we could get up earlier, but why?). We ended up getting an automatic feeder. We’ve noticed that he doesn’t associate us with food as much anymore. 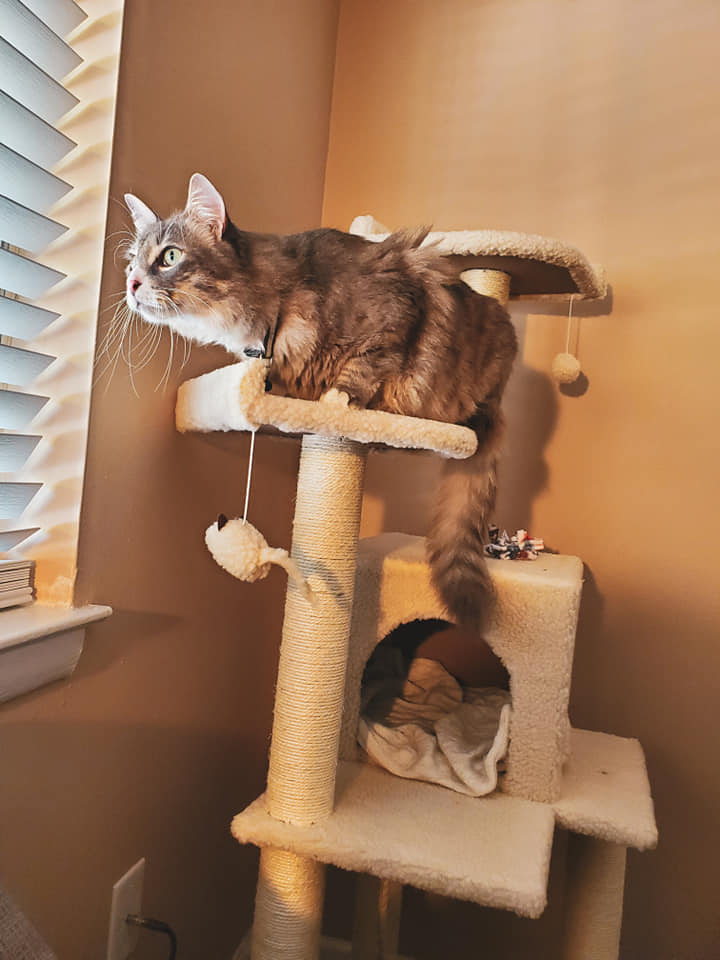 Dunkin On His Perch

Rhoda figured out that we could use a few pieces of his kibble cut up to encourage him to do tricks. In addition to using food, she also got a clicker to help with training. Check out this video of him in action.

So far, he’s mastered Sit, Stay, Come, Lap, Down, and Off. Spin is one that Rhoda has tried but we’re not sure if he’s grasping it or not. Another thing we are in the process of doing is harness training. While you can’t walk a cat like a dog, it’s another thing we can use to keep him active.

Dunkin is typically ok with being off on his own and just kind of lounging most of the time, as cats do, but he can also be curious and mischievous. I made the mistake of leaving a bag of King’s Hawaiian Rolls on top of the fridge. It had about four rolls leftover. Dunkin ate two of them. He’s a decent-sized cat weighing at around 14 pounds. 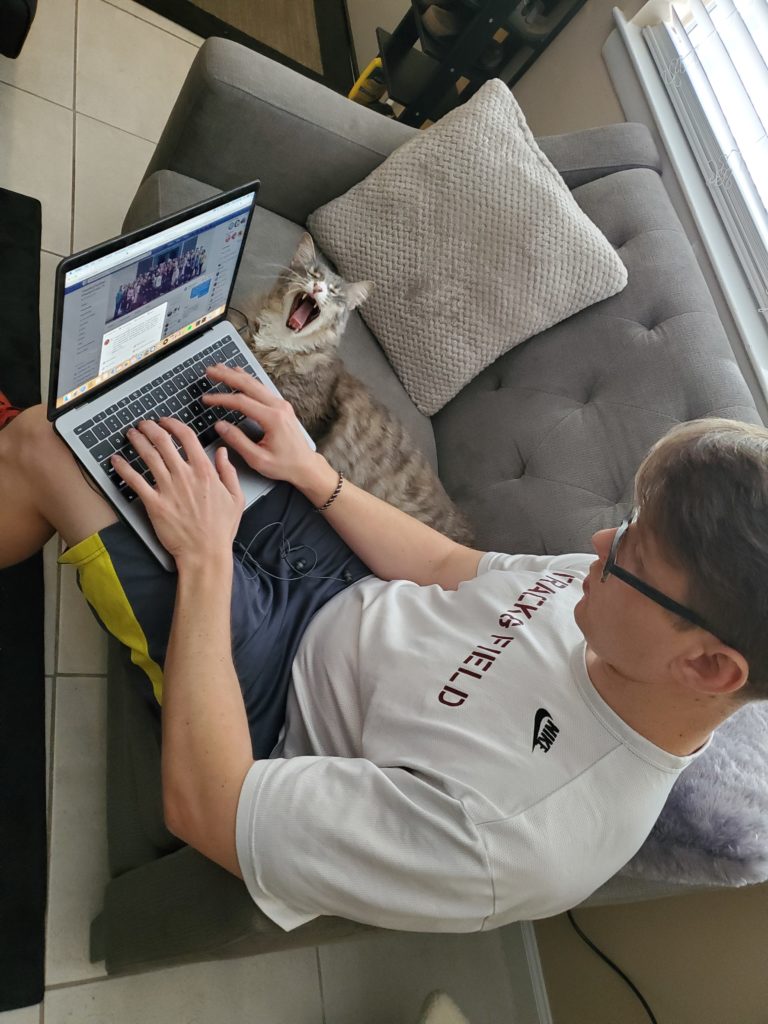 Writing a Blog While Dunkin Supervises

So, by now, unless you love hearing about others’ pets, you may be wondering, “What does this have to do with the coronavirus?” Well, as we have spent more and more time in isolation, we’ve all infused new activities in our lives to fill the day. Since Dunkin has become part of our lives for around two months, we are just now starting to get into a rhythm that makes sense for all of us, Dunkin included. It kind of feels silly to admit it but, now more than ever, it’s the little things that make this whole experience bearable.

What are some things that you’ve added to your life, no matter how insignificant? I’d love to hear about them! Comment below