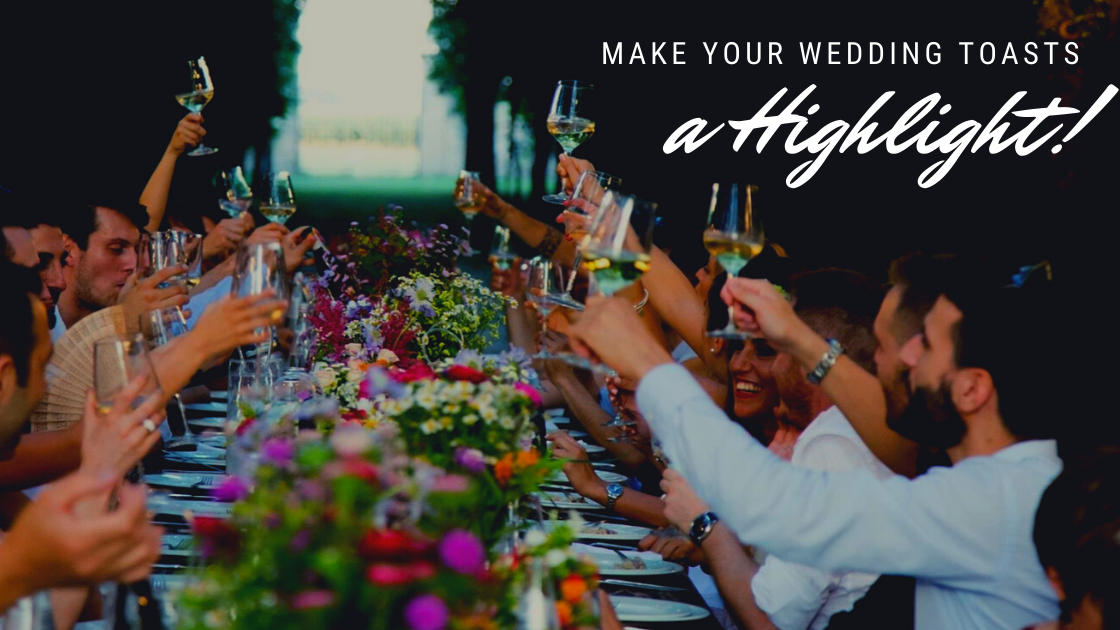 Make Your Wedding Toasts a Highlight!

Let’s shift from the usual gears of this blog, shall we? Today’s focus will be on something a bit more practical in nature. Let’s talk about wedding toasts. They usually occur around the midpoint of the wedding right before the dancing starts. It occupies a unique position in a wedding because they usually occur right before the blur of open dancing. Which means it’s going to be the last thing most people will remember.

You might think that it’s odd I’m writing this to the bride and groom specifically. You’re both highly involved in planning the wedding. This means you’re in the position to ensure the success of the wedding toasts. If you do that, the highlight of the night will continue to build and they will act as a springboard for the fun and excitement that awaits you and your guests out on the dance floor!

You made it to your wedding day!

The months you devoted to planning each intricate detail of your event have brought you here. Let’s dive into how you can set the people that will be giving the wedding toasts up for success!

Decide who is giving wedding toasts BEFORE the wedding

This may seem obvious, but it really warrants being said. You should absolutely decide on who is going to give a toast before the wedding. You know who is going to be the most comfortable speaking, is the most meaningful, and will reflect the best on you both. 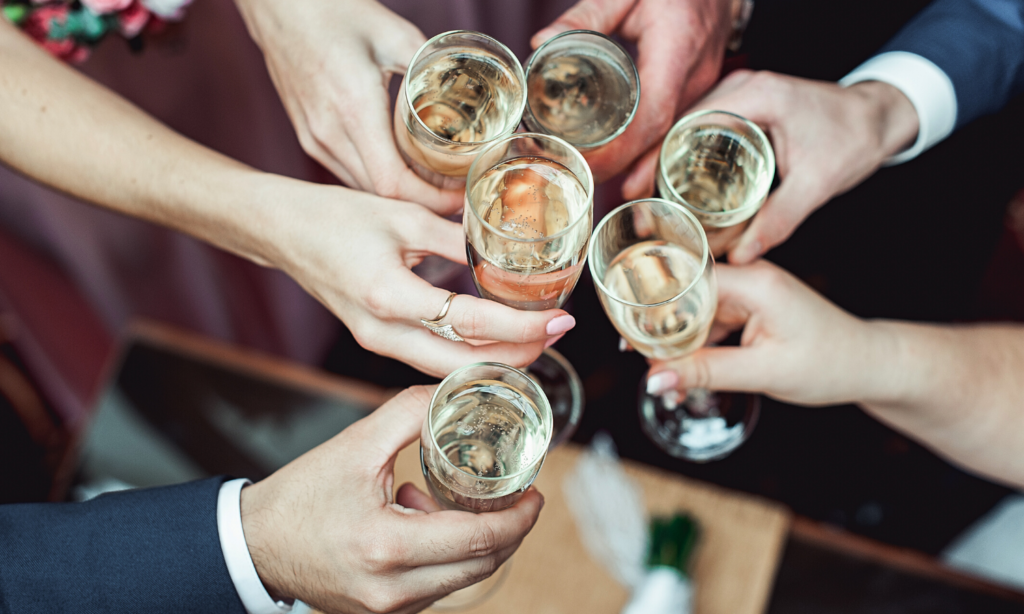 Cheers to the Bride & Groom!

Let the people you picked know they are giving a toast

This may also seem obvious, but let them know they are giving a toast once you pick them. I have been a wedding DJ at more than one wedding (Yes. More than one) where someone was not aware they were expected to give a toast. Also, letting them know beforehand may encourage them to write their speech instead of just winging it.

Don’t do an open mic toast

Please. As a wedding professional, I beg you. Don’t do it. Once you open the mic for toasts, you are opening it up to anyone and everyone who is your guest. I don’t have to tell you that there is going to be at least one person (or maybe more than a handful of people) that you don’t really want on the mic. How do I know?

I was attending a wedding, and the bride, out loud, invited anyone to give a speech. Judging from how she announced it and the DJ’s reaction to it, it was most likely a last-minute change. I was sitting in the back of the room, and, as we got to the fifth speaker, I could feel the energy waning and the attention of the guests wandering. They were ready for the next part of the reception. I think we ended up having two more people give a toast. It was an awkward situation that really detracted from the celebration.

Instead of allowing anyone to speak at your wedding… 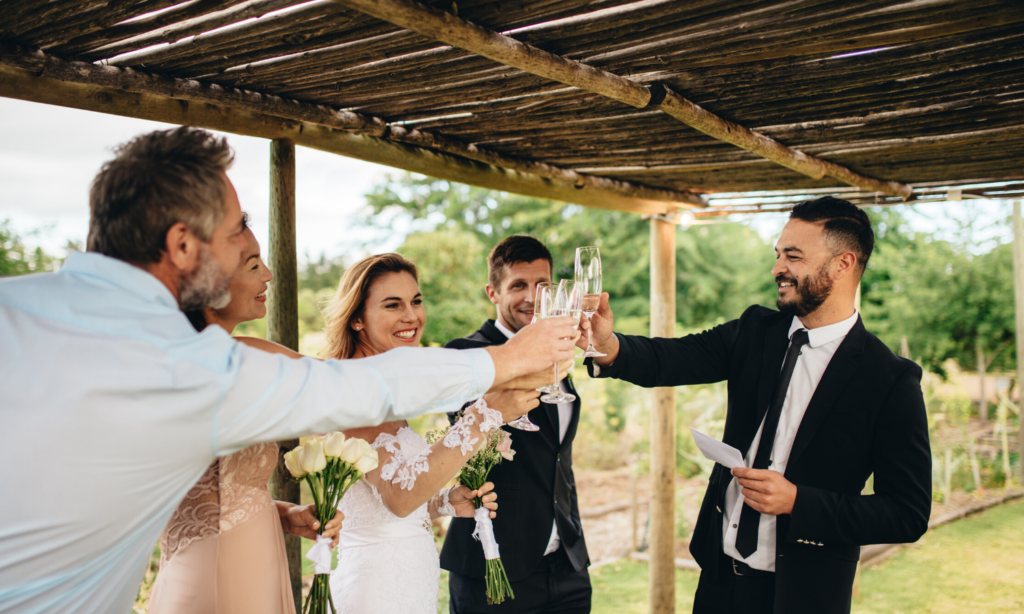 A Toast to the Bride & Groom

Do open mic toasts during the rehearsal dinner

Because of the usually more relaxed nature of the rehearsal dinner, opening the floor to anyone who would like to share their congratulations or personal stories about the bride and the groom makes more sense here. Plus, most of the people that would get up to say something at your wedding are usually attending the rehearsal dinner anyway. If you’ve given them the opportunity to say something and they don’t take it, then that’s kind of on them.

Limit the number of wedding toasts to four

This is a good amount because it’s just the right amount of time: roughly twenty minutes. With four speakers, all the high points should be hit, the wedding-appropriate jokes will be told without your guests feeling like it’s not going to end. Typically, there are two people that are close to the bride (the maid of honor and either a bridesmaid or sibling) and two people that are close to the groom (the best man and the groom’s father, a groomsman, or a sibling). 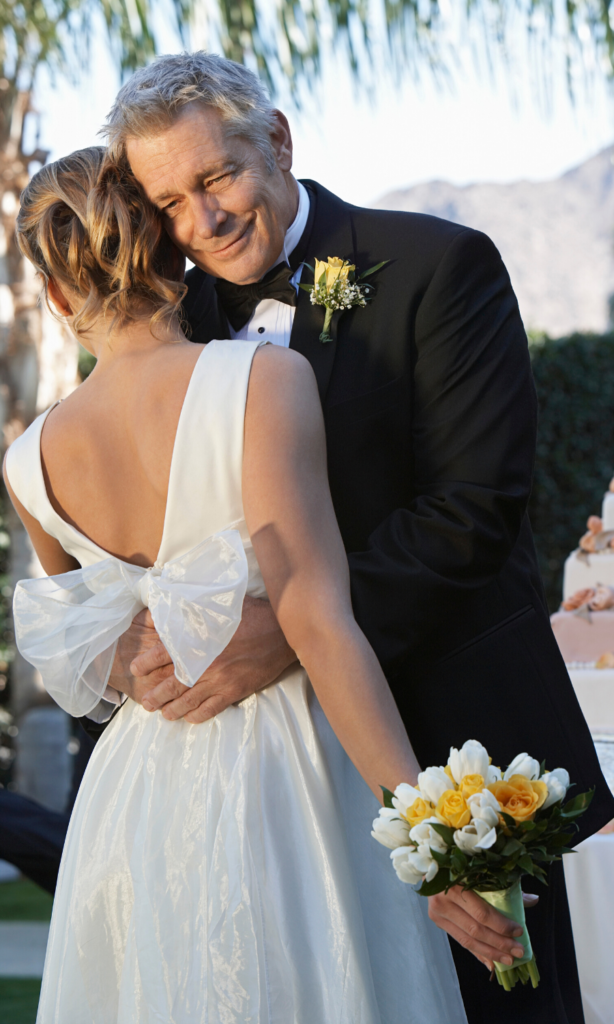 What about the father of the bride?

Great question! I didn’t include the father of the bride as a toaster because I feel his role should be to welcome the guests, give an introductory toast, and, if you’re inclined, bless the meal. I like this for a few reasons. Since the bride’s father typically pays for the wedding, this allows him the honor of being the first representative of the bride or groom to greet everyone in attendance. Additionally, having the father of the bride involved at the beginning of the reception makes the wedding more personal to you as a couple. Even if you don’t think he will want to, bringing up the option just shows thoughtfulness and respect toward him. Plus, he may just surprise you and say, “Yes.” I promise it will be one of the moments in the wedding you won’t forget. 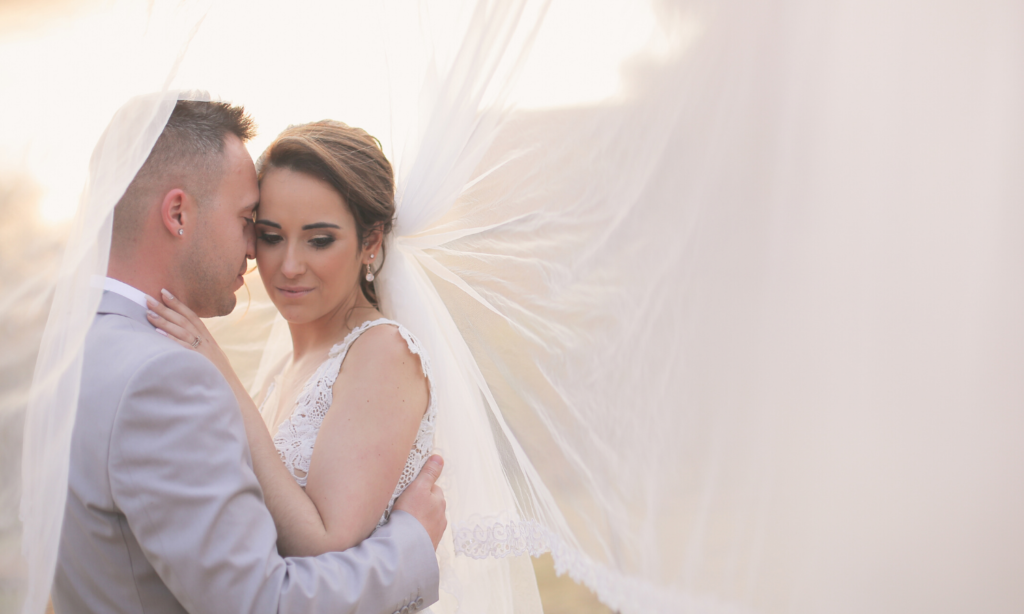 Usually, it’s either the bride or the groom that would prefer to speak to their guests but this is another way to express your thanks to everyone in attendance. This is especially pertinent if you are having a destination wedding where most of the guests have had to make travel plans to be there. It is also a good option if the wedding has a high guest count and you may not be able to make it to everyone’s table.

Next time, anyway. I’ll go over how, as someone giving the wedding toast, you can give a great speech that will wow the guests and be memorable to the bride and groom. But, that’s more than enough for a different blog post. Until then, here’s to the couples that are planning their weddings. Here’s to making your wedding a highlight!

Last week, I featured Nicole W Clark from minicouples.com talking about Your 30A Wedding Cake Toppers.

This episode of Make Your Wedding a Highlight features The Majestic Oaks, a wedding venue in Vernon, FL, that is more than just another barn wedding venue.

Film Photography For Your Wedding
March 23, 2020