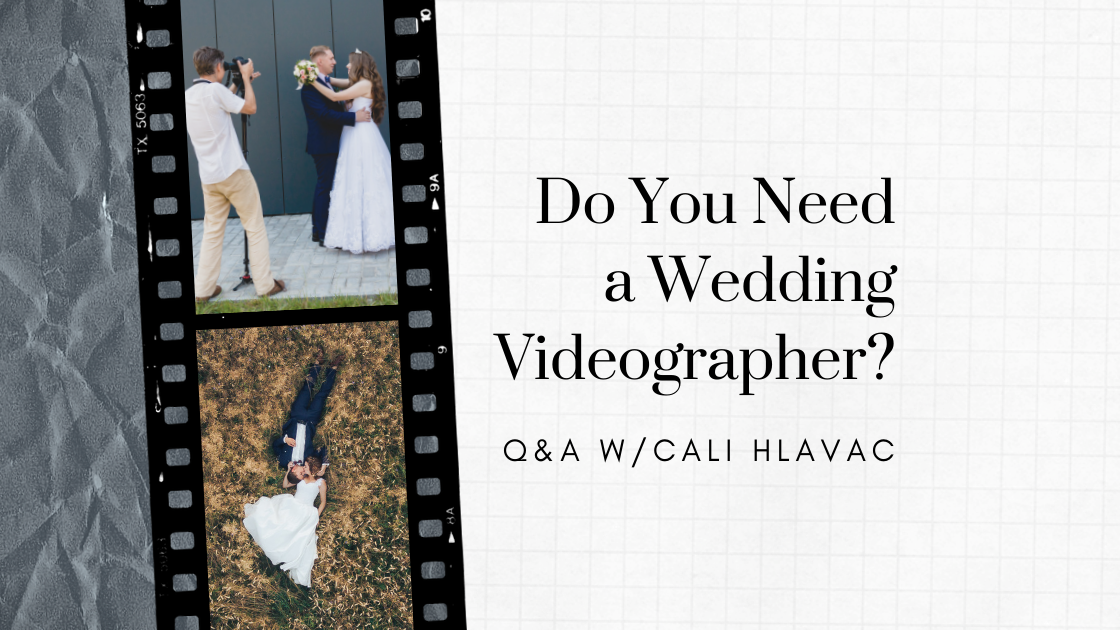 Do You Need A Wedding Videographer? Q&A w/Cali Hlavac 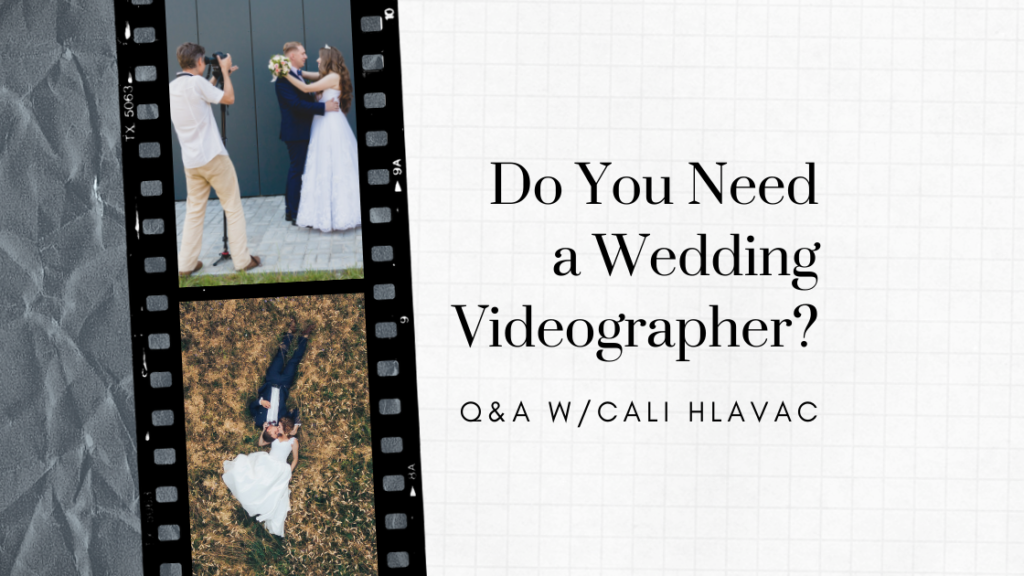 Do You Need a Wedding Videographer?

In this blog, I make the jump from spreadsheets to talking about adding a wedding videographer to your wedding event team. For that to make sense, you need to know a little more about me. I kind of make these weird mental connections with things. Anyone who has had a conversation with me probably knows that I can associate seemingly unrelated topics together and have sometimes made that transition mentally without verbalizing it and start on that new tangent while everyone else in the conversation is like, “Huh?” Also, I’m kind of a numbers geek. I LOVE spreadsheets. The way you can input numbers, organize them, and, then, get them to tell a story is so fascinating to me.

I was doing research on Walton Count weddings and I came across a wedding report that gave figures for 2019 weddings. Those figures included the number of weddings and the number of wedding pros hired for that year. It stood out to me that out of the over two thousand weddings held in 2019, there were almost 2,000 photographers booked but only a little over 800 videographers. That’s less than HALF!

Let’s Talk To A Videographer Herself!

I was surprised about this, so as I was recording my first podcast with Cali Hlavac, the owner of Silver Shade Studios. Silver Shade Studios is a company that provides videography services for weddings along the Emerald Coast of Florida. Having the opportunity to interview her, I had to ask her why she thought couples would look back on their wedding and wish they had included a videographer on their event team.

DJ Josh: What are some reasons a couple will regret not hiring a wedding videographer?

Cali Hlavac: This is one of my favorite questions because I’ve been a wedding videographer for so long and am so passionate about it.  I have lost count of the number of times someone says “Well, we’re not going to get one because we’re never going to watch it.” And to that, I say the wedding video is really not for you. It’s for your parents, your kids, or your grandparents. It’s for the day that you’re a grandparent. How many of us would sit here and say, if you went home for Christmas and mom or grandma played their wedding, you wouldn’t be dying to watch it? We all want to see that! We want to make fun of what they were wearing and the hairstyles. And that’s a realistic point of view. Take yourself out of it. Even if you don’t watch it for 15 years, you will be glad you have it someday.

I would say the second reason would be to remember the voices of those closest to you. Over the years I’ve had a lot of people email me thanking me two years later because their best man passed away or their niece or nephew got in a car accident and they’re not sure they’re going to make it. But they have this professional quality video where they get to watch them and hear them just like they’re still here. The same could be said for your parents. Watching the father-daughter dance unfold, Dad give his speech, or just seeing him walk you down the aisle are memories that are a completely different experience than what can be conveyed from looking at a picture.

I think with still images because we can take them on our iPhones and it’s so easy for us now that we don’t think about them in the same way anymore and video is just a whole other element of memory and movement. It’s almost like you can feel they’re actually still here when you watch them. 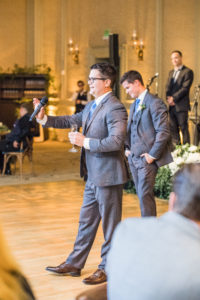 The Toast | Photo by Stephanie Messick

DJ: This may seem kind of odd since I am a wedding DJ but my favorite part of a wedding is the toasts. You never know what you’re going to get. Sometimes they’re funny. Other times they’re sentimental. Sometimes they’re just making fun of the bride or the groom or both of them. They could send you the written out part to have it after the wedding, but a lot of times toasts are just winged so that’s not an option. You’re really only going to remember specific instances of the toasts as time passes. It would be a really cool thing to be able to see the toast in its entirety.

CH: Here’s the last reason I can think of as to why you will regret not having a wedding videographer. So many times people come back and say “You caught so many things that were happening that I didn’t even know happened.” Part of this is 1) being experienced in how to capture weddings so you know what to watch for and 2) having two shooters. The first shooter is getting all the main, major event stuff, and the second videographer is getting all the details of people and their reactions: whatever the flower girl is doing or Mom and Dad embracing or crying or hugging or Mom’s reaction while you read the letter: little stuff that you will miss while you’re in your moment. I make sure to capture what’s happening around you. Again, a photographer can do some of that as well but it’s so different to see the full moment as it happens instead of it frozen.

From My Own Experience…

DJ: I can actually give an example from personal experience: my wedding. Rhoda and I met at a live jazz and blues spot call the Beal Street Bottle Club. That was where our relationship started. So, when we were getting married, we had a lot of friends that were super talented. Dinner ended up being a dinner show. I think we had like six or seven different guests or couples that performed. And we don’t have a video recording of any of it. Rhoda, to this day, says the one thing that she regrets was that we didn’t book a videographer. We also learned a choreographed dance that I don’t remember the choreography to.

Not One Or The Other

There are just so many things that are going on and you don’t realize how much happens at a wedding until it is your wedding. You’re like, “Ok. We’ve got the cake cut. Now we’ve gotta go over here,” and you’re constantly going in different directions. Being in the moment is challenging enough. Then looking back and trying to remember everything is even harder. This is why it would be so helpful to book a videographer AND a photographer. They both provide different things and they compliment each other to capture the memories more fully.

CH: It should never be a competition or a one or the other because they really are totally separate things and totally separate ways to remember. If you’ve ever had a dance recital or a school concert where Mom or Dad filmed it on the VHS. You’re in the moment but you don’t get to see the whole picture. And that’s what having a video of your wedding provides. You get to see how everything comes together while you’re in the center of it. 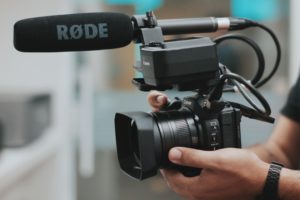 So, do you NEED a wedding videographer?

Not necessarily. But, I believe we have provided enough reasons to show that you run the risk of regretting not having a videographer as part of your wedding event team!

Cali, thanks so much for being the FIRST guest on the podcast. For all of you who love listening to podcasts, I am projecting a mid-to-end of April release for weekly podcasts. It’s still a work in progress, but I will release more information about it soon! You can find Cali on her website, Facebook, Instagram, or Vimeo. If you like what you heard and you want to start the conversation right now (she books pretty quickly!), you can either email her at info@silvershadestudios.com or call (850) 325-0873.

The Perfect Mother-Son Dance Song For Your Wedding
May 11, 2020